Exotic pets are popular choices for people who don’t want to have domesticated animals such as cats or dogs.

If you want to own your own exotic pet, you need to inform yourself about how to look after them, especially since many exotic pets can live for a long time – they’re a huge commitment!

What is an exotic pet?

An exotic pet can be everything from a sugar glider or chinchilla to a reptile and lynx. Generally, exotic pets can be defined as animals that aren’t usually kept as pets and that are often found in the wild.

Where Can You Buy Exotic Pets?

Although it often seems much easier to find a puppy or kitten, there are breeders of exotic pets that you can find online.

The important thing is to find reputable exotic pet breeders that follow the correct regulations and are licensed to be selling those animals.

Here’s where to find some popular exotic pets:

What You Should Know Before Buying An Exotic Animal

If your state has given you the go-ahead to own an exotic pet, you have to ensure that you care for it correctly.

Having an exotic pet is a huge responsibility that should not be taken lightly, as these animals are not like domesticated cats and dogs.

One of the most important things you can do before purchasing an exotic pet is find out as much information about it as one exotic pet’s needs will be quite different from another’s.

A serval cat will want different food and interaction from a reptile, for example.

Just because an animal is considered exotic, or wild, that doesn’t mean you can simply put it in an outdoor enclosure and be done with it.

You need to stay on top of their needs and part of their care entails having a vet who will be able to treat your exotic pet.

Vets that treat exotic animals are less common than those for domesticated animals, so make sure you ask your current vet for recommendations.

Your local pet store might also have some recommendations for you.

Another important thing to bear in mind before buying an exotic animal is to consider its specific behaviour and temperament.

If you’re keen to purchase a ferret or weasel, you have to know that they can be harmful to other pets you already own, such as chickens.

On the other hand, if you work a lot and don’t spend a lot of time at home, purchasing a social pet such as a sugar glider or capybara is not the best idea as these animals will be lonely.

In addition, for some animals, such as capybaras, human interaction is not enough – they need to be around other animals in their species in order to be happiest.

That said, there are some exotic pets that are solitary animals, such as the lynx, but this does not mean they don’t require stimulation.

Even though you might not be able to spend a lot of time with the animal in its enclosure unless it’s bonded with you, you will need to provide it with items it can play with.

Clearly there are many things to bear in mind before you bring an exotic pet home. You have to prepare for the new addition to your family!

With that in mind, here are some important things to learn.

Let’s look at how to care for your exotic pets when it comes to diet, enclosures, temperature/humidity concerns, and medical conditions that can affect them.

Exotic pets require lots of specific care, such as in the form of their food. They require essential nutrients for their specific needs.

One of the most common reasons why an exotic pet becomes sick is because it’s not getting enough of the nutrients it needs in its diet.

Let’s take a look at different exotic animals and the food they require on a daily basis.

Exotic pets are susceptible to various illnesses, which is why ensuring they have the correct food and hygienic enclosures is of the utmost importance.

Here’s a rundown of some common ailments that your exotic pet might experience so you can be prepared for them.

Besides paying daily attention to your exotic pet’s diet and health, another essential you have to plan is your pet’s enclosure.

Again, this varies quite a bit depending on the type of pet you choose, however a general rule is to make the enclosure as big as possible.

You need to ensure that the temperature and humidity in your exotic pet’s enclosure is appropriate for what they can handle so as to make them feel comfortable.

Cats such as lynxes, ocelots, and servals should be in enclosures that have shelter, such as dens, from which they can escape weather conditions such as rain.

However, normal outdoor temperatures should be fine for them. The serval can handle high levels of humidity, as can the ocelot which lives in tropical humid conditions.

Lynxes come from humid forests, which also makes them adaptable to humid conditions.

Let’s take a look at some other exotic pets and what temperature/humidity they need.

Are You Capable To Care For Exotic Animals?

When finding the right exotic pet to adopt, make sure you consider your lifestyle.

If you aren’t home often, you shouldn’t choose a social animal that needs a lot of daily attention.

If you don’t have the money to build the right outdoor enclosure for the animal and feed it special food, then it’s important to know this before you go ahead and buy it.

To be an exotic pet owner, you need to ensure that you’re committed to enriching and stimulating the animal so that it doesn’t become bored and depressed in its enclosure.

You have to provide it with enough playtime and fill its enclosure with items that it can enjoy.

For example, monkeys want to be able to jump around their cage or enclosure, so you’ll have to ensure it contains rungs and platforms.

On the other hand, if you want to own a wild cat, you’ll have to ensure that you can provide it with a safe, quiet enclosure in which it can feel secure.

In addition, no matter what exotic pet you own, you’ll have to be home often to regularly monitor different aspects of its care, such as the temperature of its enclosure and if it seems to be in poor condition, which would require a trip to the vet.

There are many hidden costs associated with having an exotic pet to consider.

These include cleaning-related costs that you’ll need to spend regularly to keep the animal’s enclosure healthy.

Monkeys, for example, are known to be quite messy as they urinate and throw their faeces around.

There’s also the question of ensuring you build the correct enclosure for your exotic animals who cannot be kept indoors, such as servals, ocelots, and lynxes.

This can accumulate costs as enclosures will require fencing, concrete, and roofs to prevent the animals from escaping.

Keeping an exotic animal is a huge responsibility that should not be taken lightly!

If you want to become an exotic pets breeder, you will need to get a license from the United States Department of Agriculture (USDA) that allows you to breed and keep certain species of exotic animals in your care.

These animals can be captured from the wild or be animals that have been bred in captivity.

There are two different types of licenses: a Class A license and a Class B license.

The cost of either of these licenses ranges from $30 to $750, and is dependent on your annual dollar volume of business, as the site goes on to report.

How To Get Started

Exotic animals can only be bred by a professional organization.

To get started and register your organization, there are forms you will have to fill out.

However, you’re required to first contact your USDA APHIS Animal Care office before you go ahead and mail your application, which can be found on the USDA website.

This will ensure that you apply for the correct license and get the assistance you need to ensure your application is successful.

To get a license, you first have to ensure that your facility meets the Federal standards when it comes to various aspects of dealing with exotic pets, such as humane handling of them, feeding, and housing.

If you don’t meet these standards, you will be denied a license until the problems have been corrected at your facility.

You have to pass the inspection within three months, and if you don’t you’ll have to wait at least six months before you are able to reapply for the license.

By preparing your organization to meet those standards, you’ll be in a much better position to apply for a breeder’s license.

Owning an exotic pet is an exciting prospect, especially if you want to look after an animal that’s considered wild and more interesting than a domesticated one.

That said, you have to be sure that you can care for the specific animal because different exotic pets will require vastly different methods of care, such as when it comes to shelter, food, and socializing requirements.

In this article, we’ve provided you with a comprehensive guide to various exotic pets and how to take care of them.

We’ve also provided you with information about how to tell if you’re capable of looking after exotic pets, such as when it comes to your lifestyle not clashing with the pet’s requirements.

The good news is that there’s an exotic pet for everyone! 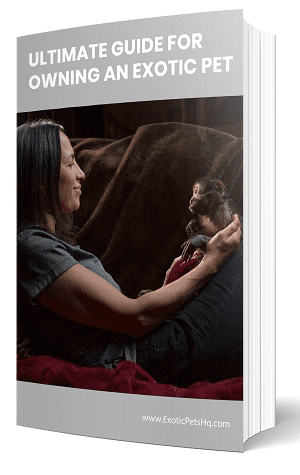